The Fox in the Attic (Paperback) 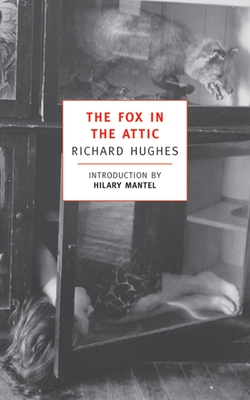 A tale of enormous suspense and growing horror, The Fox in the Attic is the widely acclaimed first part of Richard Hughes's monumental historical fiction, "The Human Predicament." Set in the early 1920s, the book centers on Augustine, a young man from an aristocratic Welsh family who has come of age in the aftermath of World War I. Unjustly suspected of having had a hand in the murder of a young girl, Augustine takes refuge in the remote castle of Bavarian relatives. There his hopeless love for his devout cousin Mitzi blinds him to the hate that will lead to the rise of German fascism. The book reaches a climax with a brilliant description of the Munich putsch and a disturbingly intimate portrait of Adolph Hitler.

The Fox in the Attic, like its no less remarkable sequel The Wooden Shepherdess, offers a richly detailed, Tolstoyan overview of the modern world in upheaval. At once a novel of ideas and an exploration of the dark spaces of the heart, it is a book in which the past returns in all its original uncertainty and strangeness.

Richard Hughes (1900-1976) was born in Surrey, England, but his ancestors came from Wales and he considered himself a Welshman. After an early childhood marked by the deaths of two older siblings and his father (his mother then went to work as a magazine journalist), Hughes attended boarding school and, with every expectation of being sent to fight in the First World War, enrolled in the military. Armistice was declared, however, before he could see active service, and Hughes was free to go to Oxford, where he became a star on the university literary scene, with a book of poems in print and a play produced in the West End by the time he graduated in 1922. Hughes’s first novel, A High Wind in Jamaica, came out in 1928 and was a best seller in the United Kingdom and America. In Hazard followed ten years later. Hughes also wrote stories for children and radio plays, but his final major undertaking was the “The Human Predicament”, an ambitious amalgamation of fact and fiction that would track the German and English branches of a single family into the disaster of the Second World War while offering a dramatic depiction of Hitler’s rise to power. The work was planned as a trilogy, but remained incomplete at the time of Hughes’s death. The first volume, The Fox in the Attic, appeared in 1960, to great critical acclaim; volume two, The Wooden Shepherdess, was published in 1973. All of Hughes’s completed novels are available fromNYRB Classics.

Hilary Mantel is the author of many novels, including Beyond Black and Wolf Hall.

[A] magnificent, authoritative, compassionate, ironic, funny, and tragic book, in which emotional and intellectual developments in private persons are seen to be now parallel to, now conditioned by, economic and political actions.
— The Times Literary Supplement

Hughes does not write with a researcher’s smug wisdom-after-the-event but with an artist’s power of recording the past as if it were the living present…The long passages on the Munich beer-hall putsch of 1923, Hitler’s escape, hiding and capture are a tour de force of dreamlike action.
— Time

[The Fox in the Attic] has many virtues, many strong and compelling moments; it continues Hughes’s particular method of tracing the misapprehensions, confusions, and wrong-headedness of people who are either not able to grasp the complex currents of the world they live in, or are blinded by the obsessions of child mentality or political fanaticism or religion.
— John Crowley, The Boston Review